Large carpenter bees are not pests! They take up very little space, and in return they are resilient pollinators, often braving bad weather when bees like honey bees are huddling in their hives for warmth. They are gentle bees too, and will warm themselves on your arm if you let them. Large eastern carpenter bee males have a bright, pale yellow patch between their eyes (and no stinger)!

Carpenter bees are so-called because they're skilled woodworkers in their own right. But carpentry is hard work on the mandibles (their mouthparts) for a single bee! So they pass down their homes to the next generation, thus reusing their family tunnels year after year, extending them a little bit at a time with extra 'chambers' for a few more young. 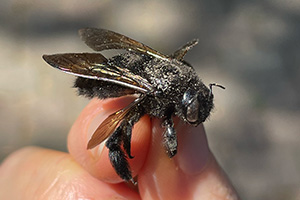 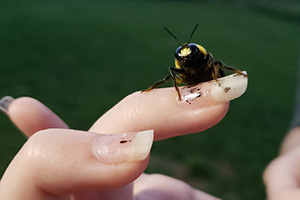 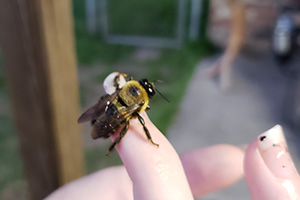 If she's starting out on her own, a single female is able to excavate a small set of chambers in which she may rear four or five offspring in a season. But in environments with fewer nesting resources, females tend to pool their resources by living together.

When living in these social groups, one female does all the egg-laying as well as the foraging, while the other adult females defend the nest, guarding it from competitors and parasites. Male carpenter bees may defend nesting areas too (even though they've no stingers)! Adult females in these groups who aren't laying eggs and risking their lives out foraging tend to live for several years, waiting to 'inherit' the nest.

Carpenter bees have surprisingly long lifespans for a bee, of around one year (and up to three years for some females). Usually carpenter bees shelter inside their nesting tunnels at night. As winter is approaching, young carpenter bees (born in late summer) curl up in the nest that their mothers built, where they will hibernate over winter, huddled for warmth with their siblings. Even some older carpenter bees will hibernate again.

Native to Japan and China, giant resin bees have been seen attacking carpenter bees, emptying out their tunnels for these bees' own use. Resin bee mandibles aren't strong enough to create their own nesting cavities, so they love using ones that carpenter, mason and leaf-cutter bees might use as well. If you see a sticky, resinous substance on the outside of nesting cavities, that's a sign of their presence (adult resin bees usually emerge in early summer).

There's a number of much tinier species of bees that are also known as carpenter bees (for their woodworking proficiency). More on them another day (in other words, check back in the future if you're curious about them, I'll research and write more about them when I have some more time)!

Some bees even nest in sandstone in the desert! These digger bees also pass nesting tunnels between generations, owing to the work involved in their excavation. Their mandibles wear down fast, yet over the generations large numbers of bees build homes near one another, so it's like a buzzing beetropolis if you happen upon them (I'll write more on these one day)!