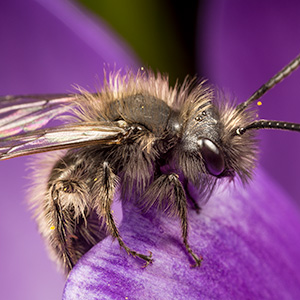 There are a number of initiatives (see below) making their way through various legislative bodies, and it is important to give bees a voice with your representatives. Bee-protective legislation flowing from the top down helps a great deal in terms of preservation of habitat, regulation of pesticides, and listing of bee species as endangered (and subsequent remediation efforts).

Individuals and communities are also powerful drivers of change. Home users buy a significant portion of all pesticides (even when compared with agricultural use). If everyone were to stop buying pesticides and buy only organic produce—encouraging their neighbors and communities to do the same—pollinators would benefit greatly, and reduced demand would result in fewer of these chemicals being manufactured and used in the first place.

Originally introduced in 2013 (and reintroduced with modifications in each subsequent congress), the latest bill seeks an urgent regulatory response to the current pollinator crisis.

The bill calls for the EPA to ban all registered neonicotinoid pesticides, now that this class of pesticides has been determined harmful for pollinators (based on peer-reviewed science). The bill also seeks to ban the EPA from registering any pesticides applied to bee-attractive plants, until these have undergone peer-reviewed testing to prove their safety.

Importantly, the bill mentions that these scientific studies take into account chronic, low-level exposures, as well as the cumulative effects of multiple chemical exposures, and that there be actual field trials. Additionally, the bill calls for monitoring of pollinator populations and their health, and the creation of a Pollinator Protection Board composed of various experts without conflicts of interest or industry affiliations.

Write or call your representatives in Congress to voice your support for and comments on H.R. 4079

The Government should introduce an ambitious target for pesticide reduction, aimed at decreasing the overall amount used and toxicity levels. This should be coupled with new support for farmers to adopt alternative approaches to protecting crops, such as integrated pest management.

Shape the future of British countryside

Three bee-harming neonicotinoid pesticides are now banned on all outdoor crops in the EU. But "emergency exemptions" still allow neonic seed dressings (such as recently on sugar beet).

More must be done to stop pesticides contaminating our countryside and our food, and harming our wildlife.

The British government is drawing up a new national plan for pesticide use. We need to make sure pesticide reduction is at the heart of farming in the UK.

Sign Friends of the Earth's petition to make sure there's a clear plan to reduce pesticides and make the countryside a safer place for wildlife.

Join the National Resources Defense Council (NRDC) in telling Biden’s EPA: for the future of our food supply, ban bee-killing uses of neonics!

The European Union has already banned these substances, and study after study shows that these neurotoxic pesticides can debilitate, sicken and kill bees — vital pollinators that are indispensable to our food supply.

A decline in the population of pollinators can result in increased food costs, reduced access to healthy food, and worsening food insecurity.

The world needs to ‘rewild’ an area of land the size of China by 2030 just to have a chance of tackling the climate crisis properly.

Britain’s nature is also in crisis, prompting calls on the UK’s largest landowners to rewild: the Royal Estates, the Church of England and the colleges of Oxbridge. The long-term vision is to see 50% of the country rewilded.

A campaign to cut the use of hazardous pesticides and promote nature-friendly farming in the UK, to protect our pollinators and the British countryside.

Calling on government to set clear targets to reduce both overall amount and toxicity of pesticides used, accompanied by support for British farmers to adopt proven nature-friendly and regenerative methods to protect agricultural production, food security, and soil health.

The North American Pollinator Protection Campaign (NAPPC) seeks to better understand your pollinator knowledge and any questions you might have about how to help them. By filling out their survey, you can also enter for a chance to win fun pollinator-themed prizes including Pollinator Posters, Bumble Bee ID Guides, Monarch Butterfly Biology Booklets, Field Guides, and more!

Petitions are one of many vital actions

Whether you sign a petition, contact your representatives, or submit public comments, don’t let these things be the only things you do for bees. There are so many ways people can help bees! Planting wildflowers helps so much, especially from organic seed or purchasing organic plants (neonics are still common in nusery plants). Just not mowing certain patches of grass helps, because wildflowers drop in.

Putting up a bee hotel and even simply leaving bare patches of sunny soil provides the spots “solitary bees” need for nesting. Even something as simple as letting dandelions live (they're great bee plants with a long-flowering season) and sharing bee-friendly tips with other people you know to do so too will help. If many people did one or more of these things, it’d be great for bees!

Too often, when one pesticide or a group of pesticides is banned, others (newer or older) are substituted (this cycle is common enough to have a name: the pesticide treadmill). If we as a species continue to create newer and deadlier concoctions and spread them throughout, the Earth will be so degraded that it will be unable to sustain life as we know it.

So an important change is to move from an industrialized agricultural model (which favors monocultures that in turn necessitate more pesticides) to organic and agroecological farming systems. United Nations experts denounced the myth that pesticides are needed to feed the world. If collectively most people stop buying conventional produce, it will no longer be profitable to farm so unsustainably (externalizing critical costs to the environment).

Good news: EU bans outdoor use of (most) neonicotinoids

On April 27th 2018, we heard great news for bees! The EU ban of neonics went into effect in mid-2018. Neonicotinoids (neonics) are not bees’ only problem, but this is still an important step! Systemic pesticides like neonics are expressed throughout the plant, including in pollen and nectar, and affect bees’ nervous systems and learning abilities. Clothianidin, thiamethoxam, imidacloprid, and thiacloprid are no longer approved for non-emergency use in the EU (only acetamiprid remains approved, after EFSA established a low risk to bees).

More work needs to be done with respect to closing the 'emergency use' loophole, especially when emergency usage exemptions are sought annually (as for sugar beets). There is every reason to consider the longer term future with respect to food security and its required pollination services, rather than allowing such known toxins to be applied to vast tracts of arable land. See the European Commission's neonicotinoid page for a current timeline of developments.

It’s so important that these pesticides not be replaced by unbanned, chemically-similar alternatives. There are other very chemically-similar compounds to the banned insecticides currently being approved by the EU. The answer is to change the way farming is done so that we no longer rely on toxins with ecosystem-wide negative effects in order to produce our food… it’s simply unsustainable (we need our pollinators)!

At the end of 2016, the U.S. Fish & Wildlife Service listed the first bees as endangered (seven bee species endemic to Hawaii). In January 2017, they added the first bumble bee (the rusty-patched bumble bee) to the endangered species list (this bee’s populations, across a once—broad range of 28 states—have declined by 87% since the late 90s). Although there was a delay in the listing going into effect, the good news is that it became effective March 21, 2017. Listing bee species as endangered is important because conservation efforts and remediation to help these bees will help many of our other pollinators.

It’s interesting to note that a number of industry groups (American Petroleum Institute, CropLife America, Independent Petroleum Association of America, National Association of Home Builders, National Cotton Council, and National Rural Electric Cooperative Association) petitioned the Secretary of the Interior to delay the listing of the rusty-patched bumble bee for another year.

Their petition claimed that: “Once the listing decision takes effect, virtually every industry operating within the species’ range – from agriculture and crop production to residential and commercial development, from energy production and distribution to manufacturing, will be profoundly affected.”

I don’t see how protecting bees could ever bring modern civilization to a grinding halt… but not taking care of our bees might just do so.