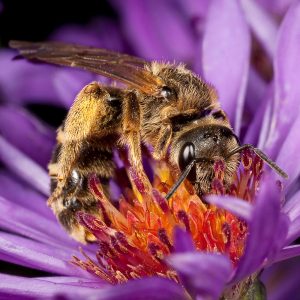 First off, let me say that I try to maintain a hopeful outlook because otherwise, there’s little point in doing anything. Anyone can help save bees, be it by planting wildflowers (and flowering trees and shrubs), selecting organic and locally-produced foods (and growing one’s own food), sharing information with neighbors and communities, putting out bee blocks (often called ‘bee hotels’), maintaining habitat in gardens for our many ground-nesting bees, educating the young on the importance of our pollinators, signing petitions and getting involved in NGO actions to bring awareness about pollinators and our food supply, and other similar actions.

But I fear for the future, especially in the current climate, and it’s particularly painful thinking that we’re on track to lose 2/3 of wildlife populations by 2020, in a period of only 50 years (since 1970). Update: the recent UN report in May, 2019 finds 1 million species are in danger of extinction, many within decades.

So there are roughly 25,000 species of bee worldwide, 9 or so of which species are honeybees (depending on who you ask), and about 250 of which are bumble bees. We have 4,000 species of bee here in the United States. Managed pollinators like honey bees are in the mainstream news much more than their lesser known brethren, and their experiences are both better and worse than other species of bees.

How are the honey bees doing? 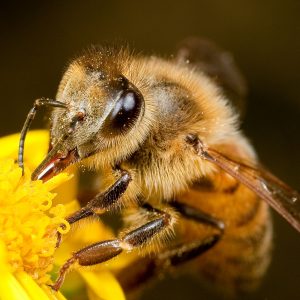 So, first, what’s happening with honey bees? Moving honey bees about for the purposes of industrial agriculture is very stressful for honey bees. They are trucked cross-country, often all the way across the country, and their conditions are not pleasant en-route. Then all these many honey bees meet, stressed from their journeys, in one place, so conditions are very conducive to the spread of disease and pathogens.

Take the big California almond pollination (about 1 million acres of monoculture at this point). It takes most of the honey bees in the country to pollinate these crops, and they spend less time over-wintering than they would otherwise in cold climates, because beekeepers need them to be ready early, around February, for the almond blooms. Most of these almond crops are also being sprayed with what are called “tank mixes”, so a bunch of chemicals all mixed up together, that way they only have to go through with one truck.

The chemicals are bad enough for bees, but there’s very little data about the potential amplifications of the chemicals mixed together. There’s a lot of acute honey bee death out in the orchards. I heard of a situation a few years back where one big beekeeper had 18 long-haul trucks of bees going in, and only 2 trucks coming out. And those are just the lethal effects, whereas the sub-lethal effects linger on and weaken and kill colonies later.

There’s a place in China where pesticide use was so high that humans now do the pollination, climbing pear trees and hand pollinating the blooms.

Honey bees, though, are domesticated, and beekeepers are monitoring and replenishing colonies as they succumb to various lethal and sublethal effects. That is not to say that they are not in danger, but it helps honey bees to have concerned humans checking on their welfare and campaigning for their health. There’s talk of breeding ‘better honey bees’ too, because since the mite that preys on honey bees (known as Varroa destructor) hit our shores from Asia, the borders closed for honey bees (too late, of course), and there is very little genetic diversity within our current managed honey bee populations.

Genetically-speaking, honey bees already have fairly weak immune systems, and chemicals weaken their immune systems further, leaving them far more open to parasites and pathogens. Weakened colonies often need help getting through winter, meaning that beekeepers provide them with food supplements that we know do not provide the nutritional balance they get from foraging in the wild (they cannot survive on supplements alone).

Even so, it’s unlikely with so much attention on honey bees, and the industry of beekeeping, and farmers’ reliance on truckable pollinators, that honey bees will die out anytime soon. Native bees are not so lucky. Bumble bees, for instance, are essential pollinators… they do something special called “buzz pollination” that only certain other specialist bees can perform (they buzz their wings while holding onto a flower to release pollen that would otherwise stay trapped in the flower). We rely on buzz pollination for tomatoes, potatoes, and blueberries, for example (honey bees can help pollinate these, but only if they follow after a buzz pollinator). It’s one of the reasons that bumble bees are in fact commercially bred too.

What about the bumble bees? 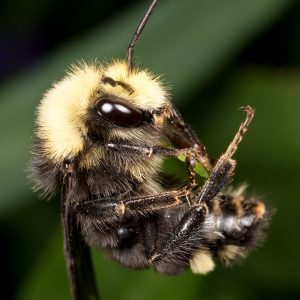 Which leads me to discuss some of the problems of commercially rearing bumble bees… the places that rear them focus on just a few particular species, and there’s not much attention to pathogens or parasites in the breeding facilities. And so when they’ve sold these bumble bee colonies to commercial hothouses as pollinators, some of the bees have escaped and spread parasites and pathogens to wild bumble populations with serious consequences.

It’s thought to be one of the main reasons that once common bumble bees, such as the rusty-patched bumble bee, have lost almost 90% of their former range and are in serious danger of extinction (in other countries we’re losing other bumble species for the same reasons; the beautiful bright orange Patagonian bumble bee, the largest bee in the world, has been almost wiped out by European bumble bees imported for commercial pollination).

Another terrible thought, even when it comes to organic tomatoes, is that now that people have recognized the threat that commercially-bred bumble bee colonies pose to wild colonies, they are purchased and kept carefully contained in greenhouses, and then destroyed after their pollination services have been performed. When we’re finding out that bees (quite seriously) are more intelligent than we thought, and display capacities for emotions that are only now being studied, it’s a deeply saddening situation, ethically-speaking.

It is estimated that global insect populations have declined 45% over the last four decades.

And all the other native bees?

Other native bees (which far outnumber honey bees and bumble bees) are, sadly, even less tracked and understood. We know that many are specialized pollinators that are far more efficient at pollinating specific plants than more generalist bee pollinators (things like squash bees, orchard bees, etc.) From what few studies we’ve seen, it appears that pesticides are having a higher impact on all these other sorts of bees, when compared to honey bees.

Honey bee colonies are very large (tens of thousands of bees), and are better able to buffer against loss of individuals. Bumble bee colonies are in the low hundreds, and suffer much more with chemical exposure. But solitary bees (the vast majority of bees) seem to be even more sensitive to chemical pollution. The next generation of solitary bees depends on individual females staying alive long enough, and having access to sufficient resources, in order to complete a series of cells inside stems, trees or underground (and since a female always begins by laying all female eggs first, carefully stocking each individual cell one-at-a-time with a mixture of pollen and nectar, populations may quickly become unbalanced, with few males around, if many adult females die before completing their nest-building work).

We know that neonicotinoids, which are used prophylactically (and get much of the press on bee deaths) don’t stay in the plant to which they’re applied… about 90% of the chemical applied to the seeds as coatings runs off, and it is very often absorbed by the very “wildflower margins” that farmers are encouraged to plant, causing high levels of these chemicals to turn up in the nectar and pollen of these non-target plants. And neonics (as they’re known for short) are not the whole problem, other pesticides come into play too, especially fungicides, which tend to be mixed with other insecticides during application, and which have been shown to intensify the negative effects of other pesticides on our beleaguered bees.

Many challenges to bee health 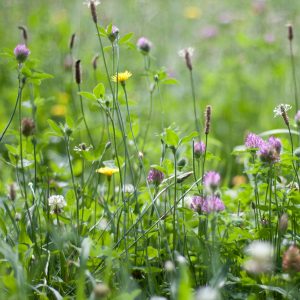 All in all, it’s a sad situation, and we’re undoubtedly losing bee species, it’s just a question of how many and whether we can reverse the declines in time for enough of them. There are many different types of bees, but they all live a hard life right now, in polluted environments with a fraction of the diverse and available forage to which they once had access.

Healthy bees need a diversity of poison-free forage plants available, with space for nesting (often in the ground, for the majority of solitary bees, or in hollow plant stems that people too often remove in their desire for ‘tidy gardens’). Bees also need spaces where their genetic diversity can be amplified rather than restricted (many of the best natural places are cut off from each other like islands by vast ‘pollinator deserts’ such as chemically-soaked monocultures, which are simply too large to be crossed by bees). There are few naturally healthy environments left for them now.

Even in rural southern Oregon, where I maintain an old orchard and thousands of individual wildflowers, I see sick and dying bees (honey, bumble, and solitary) from time to time, when I never did long ago, and my feeling is these are less likely to be of natural causes (given the increasing frequency), and more likely to result from a few willfully ignorant neighbors applying chemicals to their own gardens. Homeowners can be even worse than farmers in terms of over-applying chemicals and not paying attention to label guidelines (such as they are, and many hide the fact they’re not safe for bees; when I originally wrote this article, Bayer had just been ordered to pay $75k in fines related to its misleading consumer label practices).

All that we can do is try to share this information with those who will listen, and provide spaces of good habitat with plenty of food and nesting spaces within our own gardens and workplaces. We don’t want to end up like certain rural areas of China where levels of pesticides are so high that the majority of pollinators have been killed. In such places people hand-pollinate their fruit trees now, but humans do not make good pollinators, we’re very inefficient at it. Bees are keystone species without which we’d lose an incredible amount of plant and animal diversity. I can only hope people see that in time.